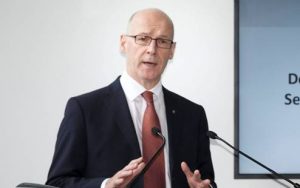 He will unveil the switch from central to local government at today's SNP conference in a move likely to receive a mixed message from business.

The new power for councils could allow them to attract new investment, for example, into town centres which could help struggling high streets.

There are already powers for business groups to form business improvement districts (BIDSs) where they want to levy an additional sum to help pay for additional services and projects.

However, there will be some concern that different levels of rates will create further uncertainty for businesses and more red tape as they deal with multiple levels of rates.

Competition between local authorities may also create a bidding war by encouraging firms to relocate their operations.

Mr Swinney will be able to instigate the new power without the need for legislation, allowing it to be brought into effect from the end of this month.

He will use powers under the Community Empowerment (Scotland) Act 2015 that was passed in June. Scottish councils will be able to use the new powers to retain all the business rates they collect.

Mr Swinney said: "With these new flexibilities councils could, for example, use their local knowledge to attract new investment into town centres and help create vibrant communities where people want to live, socialise and do business."

The move has been welcomed by local government organisation Cosla as increasing local flexibility of funding and taxation powers for councils.