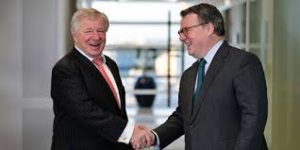 Two of Scotland’s world class financial players – Standard Life and Aberdeen Asset Management have unveiled details of an all-share £11bn merger, that will mean the newly formed Scottish investment group; which will incorporate both names will oversee assets of £660bn and announce itself as a formidable global fund management force.

As well as the combined group’s new identity incorporating both company names it will also be headquartered in Scotland. The two high profile Chief Executives, who are both listed in the top three of our SFS Top 50 Financial Rainmakers - Martin Gilbert from Aberdeen Asset Management and Keith Skeoch from Standard Life will jointly run the new organisation. Standard Life Chairman – Gerry Grimstone will chair the board of the new group and Aberdeen’s Simon Troughton will be his deputy. Standard Life shareholders will own just over two thirds of the enlarged group.

Martin Gilbert did indicate to the media that there would be some job losses from the deal but did not reveal expected numbers. He described the figure of a possible 1,000 job cuts as too high, but said overall savings would be around £200m for Aberdeen. Mr Gilbert added, “in the world of asset management you have to be either big or small. This makes us bigger which makes us better for our clients and able to provide a much better service for them.” Keith Skeoch said in a statement, “the combination of our businesses will create a formidable player in the active asset management industry globally. We strongly believe that we can build on the strength of the existing Standard Life business by combining with Aberdeen to create one of the largest active investment managers in the world and deliver significant value for all of our stakeholders.”

The reaction to the news in the city was enthusiastic as both Standard Life (up 9%) and Aberdeen’s (up 8%) shares took a surge.